A display of how a Homemade Pride parade during Covid 19 brings together, not only the LGBTQ+ community, but Everyone! 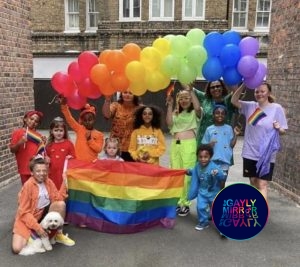 After writing a recent post about how essential it is to educate children and young people on the importance of LGBTQ issues and history; I decided to follow that up with a Pride Parade celebration during Lockdown of Covid 19. But how you ask? Since life in lockdown has affected us all, whether it be home schooling, missing friends and family or even missing our favourite restaurants the importance of trying to maintain some form of normality has never been more significant!

This being said all of London’s Pride events were cancelled. Many of the events being transformed into part of a virtual online pride. Including online live drag shows, talent acts, Q&A sessions, and much more… However, the London parade was officially cancelled! The parade for me personally is the most important aspect  of Pride. Not only is it a historical event, but also a political stand for all those within and supporting the LGBTQ+ community!

Many people believe that Pride originated from the gay rights Stonewall riots in June 1969 but much led up to this pivotal moment of history. In 1969 police had the right to arrest anyone whom they believed to be partaking in drag or the appreciation of it, also women could be arrested if they were found to be wearing less than three items of ‘feminine clothing’ and anyone displaying or taking part in homosexual acts could be arrested. Police raids in 1969 were frequent occurrences in an attempt to arrest any people violating these standards, regularly nights ending with police vans full of LGBTQ+ people, parties shut down and people arrested. On the night of June 28th, 1969 patrons of ‘The Stonewall inn’, led by trans women and lesbians of colour fought back. This moment in time took a stand! No longer would our community be exploited and disciplined for expressing themselves. This protest was heard! It made way to the first Pride march in New York City, on Christopher street (where The stonewall inn was located). The riots of the stonewall inn indeed paved the way for LGBTQ+ liberation, but the fight for equality was present from the 1950s, with an endless struggle of equality for the LGBTQ+ family. The Pride parade acted as a way to be seen heard and acknowledged, people took a stand, political statements were made and our voices began to be heard!

The importance and fun which pride is able to create in this big city brings people from all backgrounds, ethnicities and sexualities together to unite, celebrate and be gay. This being said I was not willing to let such a vital event of the year pass by because of Covid 19. People fought for Pride, and I was going to try my hardest to honour that! 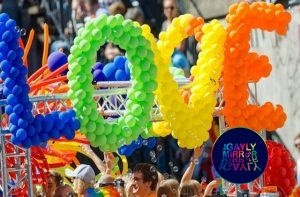 I began thinking how such an important celebration could happen whilst adhering to government guidelines. Thus, began the 2020 Pride parade planning of my very own! My sister lives in an open and friendly neighbourhood (or should I now say ‘Gay-bourhood’), which would host our first Home made 2020 Pride Parade! The Point of the parade was not only for my own enjoyment, but to educate and celebrate years of protesting and fighting for equality!

The week prior to our celebrations home schooling was adapted to educate my nieces and nephews on Pride. Their adapted school timetable included arts and crafts sessions, whereby they created their own banners, varying in size, colour, and of course including glitter! Many cooking sessions with Grandma to bake colourful cupcakes, which at the parade would be sold for a token a love. The children also chose which flag colour they wanted to represent! Planning their own outfits, accessories included! Finally with this all set we threw some glitter on our faces, put up some decorations and finally after blowing up far too many balloons, a rainbow was created!

The pride afternoon began with some simple fun and games, and then the parade was in motion!! Children, adults and four legged friends from the whole community came together to parade, whilst social distancing we marched with people watching from their balcony’s. We paraded with banners, balloons, air guitars, cycling on bikes, blowing bubbles, throwing glitter and dancing and dancing and dancing!!

The feeling of love and Pride was created if only for a brief moment in an estate in London, But it was Spectacular! Everyone laughed and joked whilst indulging in pride cupcakes and listening to nothing less than ‘Lets have a Kiki’! it was pure Pride Perfection.

So in this current time of uncertainty lets not forget the things that mean the most to us, lets not forget the history and fight in which others had to endure for our equality! Regardless of how you choose to celebrate pride, taking time to understand its history can help in the endless fight to equality that trans and gender non-conforming people of colour fought to make possible.