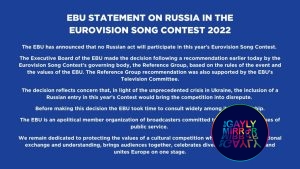 The executive board of European Broadcaster Union has finally decided on excluding Russia from Eurovision 2022, following an increasing pressure by several European broadcasters.

Earlier, EBU has stated that Russia was still welcomed to take part in the contest, after Ukraine’s broadcaster UA:PBC having sent a letter to the president asking Russia to be suspended from the event. Denmark, Sweden, Norway, The Netherlands, Iceland and Lithuania had also requested EBU to rethink about the decision.

Ultimately, Finland and Estonia threatened not sending a representative to Turin, if Russia takes part. Citi Zeni, Latvia’s representatives, also urged EBU to kick out Russia from the contest.

Eurovision has always stood as as a safe place where unity, dialogue and diversity are common values and, therefore, a decision was taking on not allowing Russia to participate this year.