Festival di Sanermo is the biggest songs competition in Italy that has a tradition of over 60 years, and since the return of Italy to Eurovision, is also the contest that decides who will represent the country to Eurovision.

Twenty-six singers – the so called “bigs” – will compete on the stage of the Sanremo Festival between 2nd and 6th March 2021 – still it not clear whether the competition will be only streamed and no audience will be allowed in the theatre or if it will be a “business as usual” event.

It is a tradition now that the winner of this festival will represent Italy at the Eurovision Song Contest, even though we’ve had an exception so far, where Francesca Michielin – placed 2nd – represented Italy that year as the winners – which felt too old for such a competition – decided to withdraw.

Who will be the singers to compete for the prize in 2021? 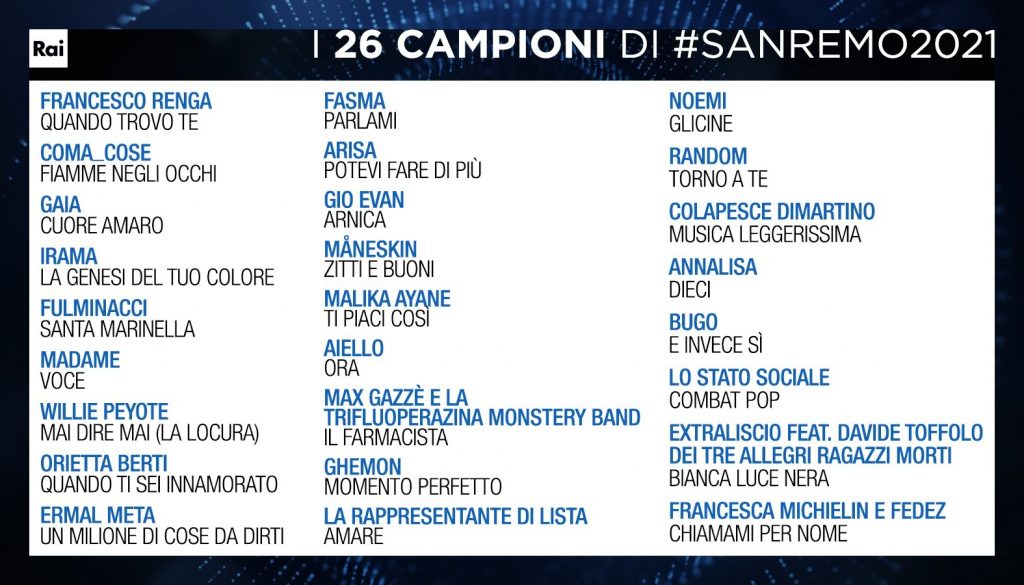 There are some very well known names to ESC fans: Francesca Michielin (which will compete together with Fedez who is Chiara Ferragni’s husband) and Ermal Meta that represented Italy in Lisbon in 2018.

The list of singers is really rich this year and there is a good number of them which could possibly represent Italy to Eurovision Song Contest 2021 and finally win.

Who should we be focus our attention on?

As we can see, this year Diotato will not compete and therefore will not defend his title and participation in Eurovision, but still there are some singers who could really make Italian fans dream about victory.

Arisa is surely one of them: she has won Sanremo Music Festival already twice with very touchy songs and thanks to her fantastic vocal skills that make of her one of the most beautiful voices in Italy. She has always admitted how much she would love to represent her country on the stage of Eurovision. The song she will perform in Sanremo is called “Potevi fare di più” (that translates “You could have done more”), is surely going to be a strong love-ballad with lyrics that will get straight to our hearts. If winner – she would surely represent Italy with the talent, purity and honesty she is known for.

Francesca Michielin Ft. Fedez… simply wow!! These two promise to blow Sanremo’s stage up. Fedez is a very good Italian rapper which – while being judge at X-Factor for over 3 years – has shown his immense culture in music; and Francesca, a delicate but yet strong voice that is so loved by ESC fans… I do think that if they win Sanremo they could really take ESC back to Italy.

Ermal Meta is another strong singer with powerful voice and personality: he is not new to Eurovision and in the last couple of years has reached high levels of appreciation in Italy, his name is already listed under those who could possibly win the competition this year. I still cannot see in him a really Eurovision-styled-singer … I am afraid he would not be up to the standard of show of this contest.

Måneskin is a group that comes from XFactor Italy and is a mix of styles and personalities that, if able to win Sanremo in 2021, could really give a great show on the stage in Rotterdam.

Surely, there are other artists how could be good representative for Italy at Eurovision: Annalisa, Irama, Gaia for example, that come from talent shows and that, given their young age and their international knowledge could build up a great show for ESC.

On the other hand, the Italian fans were over the moon when they knew that Orietta Berti – a piece of history for the Italian music – was taking part to the festival, and all of them wanted her to represent Italy at Eurovision Song Contest.

Who is your favourite?