SERIOUS ACCIDENT FOR SENHIT AND HER DANCERS YESTERDAY EVENING DURING THE JURY’S REHEARSA OF THE EUROVISION SONG CONTEST 2021: TECHNICIAN FORGETS TO STOP THE ROTATING PLATFORM. 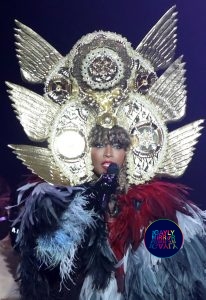 “Last night, Friday 21st May, during the rehearsal of the Grand Finale of Eurovision Song Contest 2021, which is the rehearsal used by juries to vote their winner, the team got involved in a technical incident where their safety was seriously put at risk.

The rotating platform on which the artists were performing was not stopped by the technician provided by the organisation, so Senhit and the dancers had to jump off the moving platform that was still rotating at high speed.

Since the platform is in fact a metal plate of about 6×2 meters that rotates rapidly, raised a few tens of centimeters from the ground, getting off it while it is in motion involves serious risks, including the possibility of being hit and dragged once on the ground.

Obviously, the performance for the juries was heavily penalized by the incident, both for the impossibility for the artists to perform the planned choreographies and for the loss of concentration that it inevitably entailed. This is of course less important than the risk taken by the artists but still relevant considering the importance of yesterday’s performance.

Among other things, the rotating platform was also activated with delay, with the consequence that all the expected shots were distorted (in other words, when her face should have been framed, her back was taken instead).

Despite this, Senhit, Flo Rida and the dancers fully honored the say “show must go on”, completing the performance as best as they could, while the juries voted without being informed of the incident.

Given the seriousness of what happened, the management and San Marino RTV offered the willingness to withdraw the team from the competition, considering the physical safety of the artists as being more important than the competition itself.

As a form of respect for the audience and their fans, Senhit, Flo Rida and the dancers declined this offer, even considering the fact the organisers granted l- ate at night, and acknowledging the mistake – to allow during a trusted technician of the team alongside the the host broadcaster technician for the remaining performances. This, anyway, was what RTV, the participating broadcaster, and the creative director had repeatedly requested in the months preceding the event.”

We do wish Senhit and San Marino’s team the very best of luck for tonight’s final, they do deserve to valued for the fantastic show they’ve put on and keep on giving us every time they are on that stage.

May the best song, and performance win!