We’ve seen him and appreciated his performance (and not only) in yesterday’s second Semifinal of Eurovision 2021, so we want to invite you all to get to know Ahmad a bit closer.

Ahmad is Syrian and is now an international ballet star, but his past and childhood gave him many obstacles to overcome, and he did, boy if he did! 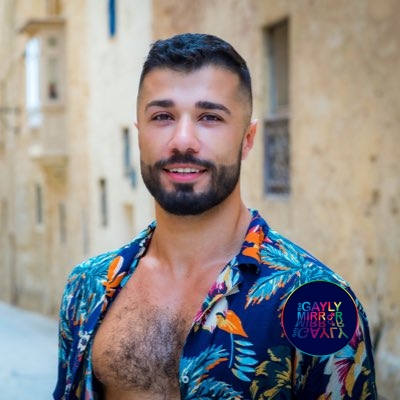 He was born in 1990 in Yarmouk in Damascus, where he grew up and lived for the first years of his life. From 2007 until 2016 he studied dance and taught ballet to support himself in the city of Damascus. He also taught dance to orphaned and disabled children free of charge. His mother still lives in Syria, while his father lives in Germany.

Ahmad not only struggled to survive as a dancer during the Syrian war: he also fought a tough, private war to realise his dream. “My father forbid me to dance,” he says. “Because in our culture, to be a ballet dancer is the worst thing your son can choose to do for a living. He said it was a shame for the family and wanted me to study English or medicine. But I said no, this is my life. I went to dance class secretly. When he found out, he beat me with a wooden stick. He used to beat me really hard. Once he hurt my leg so badly, I couldn’t dance for days. But I never gave in. I said to him: it’s dance or die.”

In 2014 he was a contestant in the Arab version of So You Think You Can Dance, making it to the semi-finals. Since he was a Palestinian without national identity, he was told he could not win.

Nevertheless, his appearances brought him to the attention of the Dutch filmmaker Roozbeh Kaboly, who produced a documentary about him that aired on Dutch television allowing Ahmad to move the interest of the Dutch National Ballet Company, where he is now resident dancer.

Ahmad has also produced several short YouTube videos that depict him dancing in Syria, like the one you can watch below.

The Documentary about his life is called Dance or Die and was aired on the national Dutch tv in 2016. It depicts him dancing in the ruins of the camp where he had grown up, visiting his family’s former home in Palmyra, which has been destroyed, with his mother, and the ancient Roman theater of Palmyra, where he dances. Ahmad also takes the filmmakers to his dance studio in Damascus, where some of his students talk about their lives, and what dance means to them. Unluckily, the ancient Roman theater in Palmrya was subsequently destroyed by ISIS and their religious ignorance.

His performance during the second Semifinal of Eurovision Song Contest 2021 with BMX-er Dez Maarsen was a mix of classical and contemporary ballet together with Sufi whirling.

About the idea of the performance Ahmad said: “This will be the most important performance of my career. My mission in life is to tell my story because my story relates to many people who need a voice. Our society consists of people from different places and with different cultures, yet we are all Dutch. That is also what you see on stage: diversity. We are all different, but also all Dutch. Together with Dez and the other dancers we tell the story of the Netherlands: the power of unity.”

He is also an active supporter of LGBT+ rights around the world.