What an amazing night, this Grand Finale of Eurovision Song Contest 2021 with a so unexpected but wanted victory of the Italian Band Måneskin.

It was looking almost impossible, given the high scores that Switzerland and France had reached by almost the end of the votes announcements… but Måneskin were finally able to bring the Eurovision Song Contest back to Italy after they last held it in 1990. This becomes the 3rd time that Italy wins Eurovision.

The band started playing in the streets and after ending second in XFactor Italia in 2017, this year they won the famous Festival di Sanremo and triumphed in Rotterdam with 524 total points.  France and Switzerland ended up 2nd and 3rd, respectively with 499 and 432 points.

Disappointment for some other countries.

Surely San Marino, Malta and Israel deserved higher scores. Something we really cannot still understand is how Senhit (San Marino) that worked very hard for two years with her Freaky Trip To Rotterdam, keeping a constant contact with Eurovision Fans, that also managed to bring Flo Rida on that stage, ended up with only 50 points. Some fans suggested that it could possibly be because of her strict partnership with a famous Eurovision based blog. That move was possibly seen and perceived as a tactical or a political move that possibly did not meet the favour of many Eurovision fans. 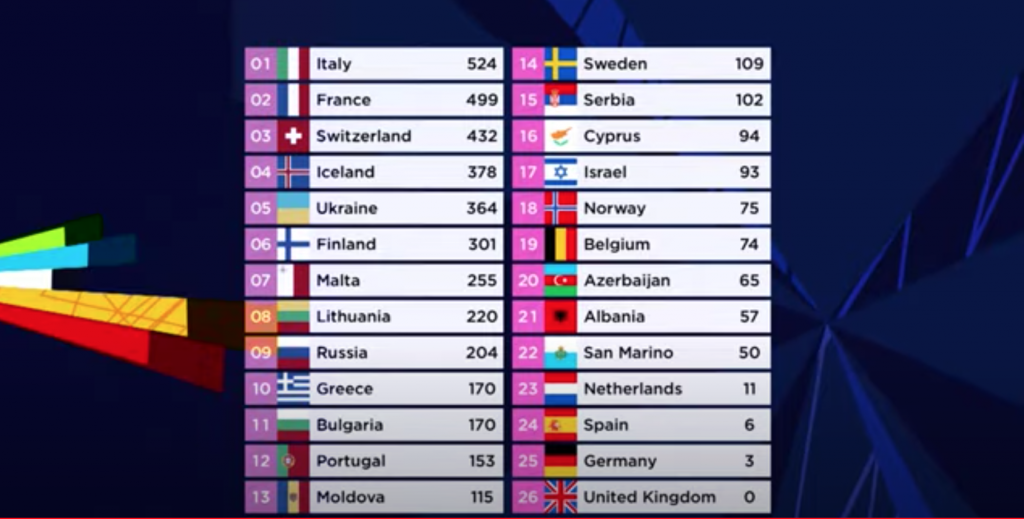 A sad note for the United Kingdom that ended up with zero points (again) getting second only to Germany. Does this mean that both countries will have to take Eurovision Song Contest more seriously and work harder on their selection and performances?

Måneskin’s press conference was absolutely hilarious. A moment of happiness for all people in that room (but for one “journalist” that only wanted to create some stupid gossip about the band using drugs during the event, offending not only the band but the entire organisation of the Eurovion too).

Månesking proved once again that if you do believe in what you do, you do it passion and do not give up, your dreams do come true.

Still no clear decisions on where the Eurovision Song Contest 2022 is going to be held: if Milano (which in 2015 hosted the Universal Expo), Turin, Rome or Naples will host the event. One thing is sure now: that so called “Sanremo Mafia” apparently, does not exist and RAI is ready to organise a huge event.

Will Italy be able to keep the high standards of Quality that EBU set for this show and that other host-countries have delivered? We are sure they will.

Congratulazioni Måneskin – as an Italian living abroad – you made me so proud of our music and Country.