This group of homophobes is plotting to hijack LGBT+ all the online events for the Pride Month starting on June 1 by clogging social media with poisonous homophobia and boycotting supportive brands. 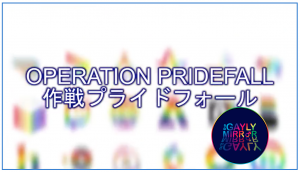 This is something they are already organising since early May, according to an archived version  of what they have called “Operation Pridefall”.

Their plan is to create a multitude of fake accounts on social medias and start posting and share ANTI-LGBT+ contents and to also target those brands that will have digital campaigns linked to the Pride Month. Targeted companies could include Starbucks, Amazon, Coca Cola, several British and American media outlets, Levis, Adidas, or still, some local law enforcement departments.

Some members of Alt-Right 4chan would supposedly already have supplied other thousands of users with downloadable packs of Anti-LGBT+ memes in order to be disseminated on social media as soon as their attack will start.

Promotional and violent homophobic video for this campaign.

“Every June, hundreds of massive corporations band together to smother social media with posts in favour of ‘Pride Month’, a code word for the degeneracy that is LGBT+ activism.”

This is what a user of the above mentioned group published to sponsor the cyber attack that will supposedly start on 1st June. The video features Pepe The Frog threatening a Drag Queen with a riffle.

According to PinkNews: “organisers asked for 4chan users to set-up fake accounts using stopgap phone numbers and email accounts. Other users workshopped tactics now that the ‘ch**k flu has disrupted the degeneracy parades, so now that all of the degenerates are stuck indoors, what can we do to rain even more on their cancelled parade?’ Methods ranged from co-opting the six-stripe rainbow flag to promote racial and ethnic segregation in an effort to have the rainbow labelled a hate symbol, posting “anti-faggotry, suicide statistics and anti-tranny memes” and even crowdfunding to run anti-LGBT+ billboards. Discussions on Discord, a real-time chat platform, saw users cabal to repurpose TikTok videos with anti-LGBT+ captions alongside setting-up fake dating app profiles” .

And you can see some screenshots here below.

TheGaylyMirror.com does not agree to this operation called “Operation Pridefall” and all media and links shown in this post are simply used to inform our LGBT+ community worldwide of the danger we are running.