Victor Orban and his homophobic group of MPs are continuing the ferocious and hatred campaign agains Hungarian LGBT+ population.

The legislation put forward by Prime Minister Viktor Orban’s right-wing government says only married couples can adopt, with some exceptions for single relatives of the child who is going to be adopted.

Until this law, even if same-sex marriage is illegal in Hungary, adoption has been possible if one partner applied on their own. This is such a dark moment for human rights, and not only in Hungary. 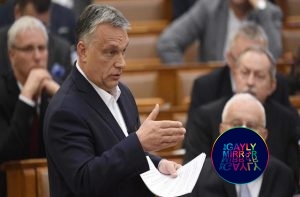 From now on single people will require special approval from the government to adopt. In the same amendment approved on Tuesday family is defined as “based on marriage and the parent-child relation. The mother is a woman, the father a man”. Basically same-sex couples will now be completely unable to adopt, even if one of them applies as a single person.

“The main rule is that only married couples can adopt a child, that is, a man and a woman who are married,” Justice Minister Judit Varga said.

This new law also states that all parents must raise their children in a conservative spirit, as now written in the Hungarian Constitution: “Hungary defends the right of children to identify with their birth gender and ensures their upbringing based on our nation’s constitutional identity and values based on our Christian culture,” and this, of course, does not even respect the thousands of other Hungarian citizens that are not Christian and belong to a different religion.

The government justified this new amendment because “new ideological processes in the West require us to protect children against possible ideological or biological interference“.

The homophobic and racist drift of this government worries the entire European Union, which has already repeatedly admonished Hungary on the lack of respect of LGBT+ and Human rights.

Also Masen Davis, Executive Director at Transgender Europe, expressed concerns for this new law and said: “we are deeply concerned for the health and safety of trans children and adults in Hungary in such a hostile climate.”

What is the EU doing?

According to the BBC, all European leaders have reached an agreement with Hungary and Poland in order to avoid these two countries vetoing the EU’s long-term budget that will be used to improve LGBT+ rights in all European nations, as this is seen as an attempt to impose with no respect liberal values over their conservative ones.