This gay 13 year-old, together with a cool Rabbi, decided to have a gender neutral coming-of-age ceremony instead of the usual Bar Mitzvah or Bat Mitzvah.

It is well known that Judaism celebrates their young members when they get to the “age of maturity”, when they can be counted as active part of the community, almost a religious-adult age.

In this cases, when you are boy you celebrate your Bar Mitzvah, when a girl you have instead your Bat Mitzvah, and celebrations see your entire family and all your friends having a party with you.

We are in Massachusetts and as The Guardian reports, Ruby Marx did not feel right having a tradition coming-of-age ceremony and decided she wanted to “something in the middle”. 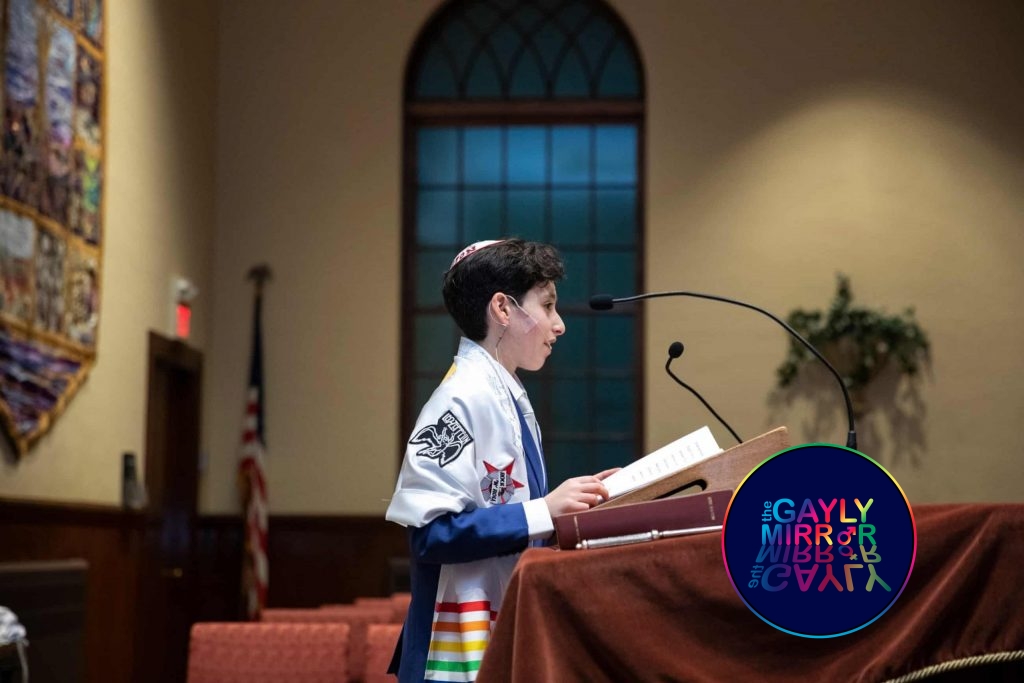 She said: “Judaism is a big part of my family – we keep kosher and my older sister had a bat mitzvah, so I knew I would have to have one too. […] But I didn’t want to be called a girl, which is a traditional part of the ceremony. And I didn’t want a bar mitzvah either. I wanted something in the middle.”

Ruby said that her rabbi is “the best”, and added: “She loves me, so she was super cool about it.”

It was her mother who thought of a B’nai mitzvah, that she read about in an article, and that was exactly what Ruby wanted. In fact, in her interview she also said: “I was three when I started dressing in a more masculine way. […] I don’t feel like a boy, but I don’t feel like a girl either. And the way I’ve expressed my gender has always been supported. My family knows I’m going to be masculine and still use female pronouns and just experiment. I talk to them about everything. All my grandparents know too.”

During this B’nai Mitzvah Ruby looked fantastic wearing a blue suit and a silver tie with black boots. She said: “I looked sharp. And I wore a tallit (which is prayer shawl that you are allowed to use only after your Bar/Bat Mitzvah) that had rainbows on the ends, with lots of rock’n’roll patches and Joan Jett on the back. We went to this sewing place and the guy printed out a picture of her on fabric that we sewed on.”

Ruby’s “super cool” rabbi said in her blessing during the ceremony: “Keep bringing your full self to the world. The world needs people that don’t shy away from their true self; we will always be there for you.”

Maybe I was super cool about this, but Ruby was even cooler than me! It is an honor to be your rabbi! https://t.co/WgWwOxT70c

Social actions as part of the Jewish Tradition

Judaism has always had a strong sense of community and Jewish Associations often offer help for social matters. This is why her synagogue requires a social action project as part of the coming-of-age ceremony, so Ruby decided to throw a benefit concert.

Ruby said: “I donated the money I raised to Girls Rock Campaign Boston, which runs a camp I went to last summer. It’s pretty open, so you can be trans and non-conforming, and there were lots of women there who were strong and powerful and also super musically talented, kind of like Joan Jett.”