The man we all came to know and love as the “Big Boss” of Eurovision has stepped down after a decade of being the Competition’s Executive  Supervisor.

Besides being famous for using the catchphrase “Take it away!” to announce the end of the voting process at the Grand Finale, Jon Ola successfully refreshed and modernised the show’s format.

In an interview for eurovision.tv, Jon Ola Sand said:

– “The past decade at the European Broadcasting Union (EBU) has been fantastic and exciting, but it will also be good to come home.”

– “I have been involved with the Eurovision Song Contest for over 20 years. First as Head of Delegation for Norway, then as Executive Producer in Oslo in 2010 and I have been privileged to have been the captain of the ship in Geneva for the past 9 years.” 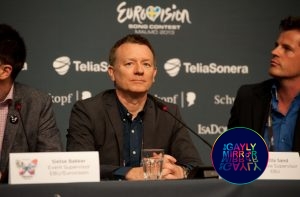 Since Sand was appointed Executive Supervisor in 2011, Eurovision has seen growth and changed in many areas:

– Australia joins the family! One of the most surprising additions to the show in recent memory.

“Australia adds flavour, diversity” he says. Since then they placed very high and even got second place in their debut year with Dami Im and her “Sound Of Silence”

– In 2013 it was decided that the show’s producers would decide the running order of performances to ensure variety throughout the show.

– In 2016, a notable change was made to the voting process. The jury vote was separated from the viewers’ votes. “The way we present the voting – by splitting the jury and public vote – creates much, much more excitement”, Jon Ola said.

This year Jon Ola Sand and his team faced their toughest challenge. Because of the pandemic, they had very little time to reinvent and adapt the show. Nonetheless they managed to give us a spectacular event – “Europe Shine a Light”, a tribute to the songs and artists that would have competed in the 65th ESC.

Sand will return to Norway, taking up a new position at the headquarters of the public broadcaster NRK.

Good Luck Jon! We will miss you!