The fight for LGBT+ Rights in Poland is something that must be carried on, and these MP’s from the left-wing have found a great way to troll the re-confirmed president to Poland. 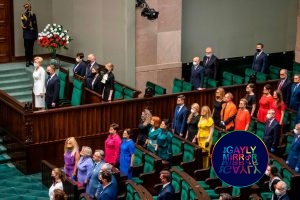 As anticipated, unfortunately Andrzej Duda was re-elected president of Poland last month:in  his campaign he lashed out at same-sex marriage and promised to ban same-sex couples from adopting children, comparing homosexuality to devil’s plans. With his re-election, LGBT+ rights (or whatever the LGBT+ communities in Poland reached) were smashed and completely cancelled.

With the LGBT+ Polish population under attack, some activists still try to fight against this huge wave of homophobia, and some of the left-wing MPs decided to show their support to the LGBT+ community wearing colourful outfits and creating a rainbow during the swearing of the homophobic president.

Magda Biejat from the left-wing Razem party, said “The president of Poland should defend the rights of all citizens”.

President Andrzej Duda has been sworn in for his 2nd term in office. In background, Left's MPs in rainbow facemasks and dresses stand in solidarity with #LGBTpeople. The photo was published & removed from the account of @KancelariaSejmu. Let's make it unforgettable! 🏳️‍🌈🇵🇱 https://t.co/tvvZ6JxMNO

Today in #Sejm @AndrzejDuda is being sworn in as Polish president. Members of Left coalition came in rainbow mask and… look ❤🧡💛💚💙💜 The kind of solidarity we need after campaign of hate, thank you! Rainbow is not an offence, #LGBT are human beings #Poland pic.twitter.com/dj26Y9UTJd

Andrzej Duda’s swearing-in ceremony. Don’t ever let anyone tell you that your vote for The Left is a wasted vote. After all they’re the only ones who stand in solidarity with Polish LGBTQ+ people pic.twitter.com/uY1yLHNlFD

Members of the Left, as always, in defense of people's freedom and dignity! ❤️🏳️🌈✌️

Today at the swearing-in of President of Poland Andrzej Duda: https://t.co/UzQ7hzRPnz

The three have been charged with desecrating monuments and offending religious feelings and face up to two years in prison if prosecutors proceed with the case.