She faced death threats, offences, sexual harassment and did not have an easy life, but these hard times did not stop her. She is the first transgender police officer to become trans victims support officer using her experience to help others.

Her name Reem Sharif, and during an interview she said that she intends to prove trans people can be perfect leaders, able to inspire others like her, to help change and stop all those prejudices that have held them back.

Reem added: “Unless (trans people) have role models to follow, they will continue in the same footsteps of their predecessors who have survived by begging, dancing or carrying out sex work. But when they see a transgender policewoman or a television anchor or a lawyer, they will realise they can dream and aspire to reach for the stars.” 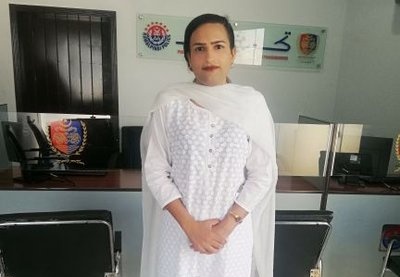 “The other day we got a call from a trans woman that her brothers had threatened to kill her. I went and talked them into accepting that who they thought was their brother had always been a sister. In another case, a tenant was being thrown out of her home for being a trans person and I was able to stop that.”

Her Success Comes after a long series of hard moments.

Yes, her success is a hard won victory, because she had to endure constant abuse through college, which she describes as “the worst years of my life”, in addition to being ostracised by her own family. Yes, because families sometimes can be your worst enemies:

“For my brothers, I was always a source of humiliation. One of them told me he would have a problem getting his kids married off if people found out about me. I was very hurt but I said they don’t have to tell anyone about my existence; in any case we live in different cities and I support myself.”

Strangely enough, Pakistan is becoming increasingly accepting of trans : in 2018 the government approved a bill that grants broad legal protections for the Pakistani trans community. This, unfortunately did not stop abuse and discrimination that are still pervasive in Pakistani society, and the experience of being shunned by families is common for too many trans people in the country. This marginalisation makes it harder for trans people to access jobs, education and healthcare.