Extremism, in every single aspect of life, is way too dangerous and only brings hate.

The author is Muhaned Velic, famous Bosnian Imam that threw several shades of hate on the LGBT+ community of the country and praised his God for bringing Coronavirus and subsequently the cancellation of various social events, among which the Pride Parade in Sarajevo.

He wrote: “The media inform us that the homosexual parade in Sarajevo has been postponed due to the coronavirus.
…
In every misfortune and tragedy – there is also a grain of happiness, goodness and beauty.
Thank Allah for everything.
…
May dear Allah grant that the crown and the gay parade never return to our city and country!
Amen!”

Rapidly, according to Radio Free Eurorpe a spokesperson – Muhamed Jusic –  on behalf of the Grand Mufti, denied Velic’s words “This is his personal position and it is not the position of the entire Islamic community.”

Velic, anyway, defended his ideas, saying that he did not “spread hate speech,” and that he had the right to express his opinion.

The actual situation in Bosnia is not LGBT+ friendly at all. Always Radio Free Europe reports that

The Bosnian capital held its first-ever gay-pride, using heavy police security on  8th Sept 2019. The event had the name of  “Ima Izac!” that translates as “Coming out.”

Unfortunately, dozens of followers of a conservative Islamic group held a rally against the event, describing the pride march as a “sin” and “humiliation” for Sarajevo. And, as if it was not already enough, another protesting group, Svjetlost (tr. Light), marched the day before the gay-pride event, calling on people to rally against “un-values propagated by the LGBT+ community.”

Some of the Imam’s followers commented with words of support for the LGBT+ community.

The series of comments to his post is unbelievably long, but a few comments stand out for taking distances from his words and supporting the Bosnian Queer Community:

“This state is not a caliphate, and I hope it will never be. The expression of such public views by one imam is inadmissible! There are gays in the Islamic religious community itself, because according to the World Health Organization, their percentage among the citizens is around 10 percent. Forcing these people to remain hidden within the 4 walls is inadmissible, and they must rebel in order to have normal conditions of life in accordance with their inner desires, such as the dear God gave them. Who are we to judge, and in a religious sense? If you are believers, let God do His work. Conventions on international law guarantee all people the same rights, and so it must be if we want to have a human state. I am sorry that we need to point out to people again that they cannot have greater rights than others and different ones.” 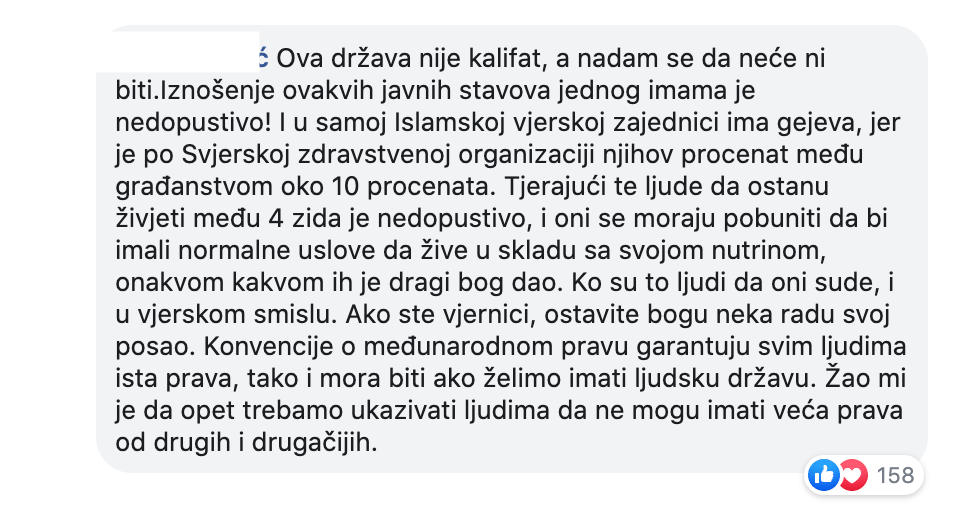