For the first time the song to be brought to the Rotterdam stage will be chosen with a digital battle!

You can vote here www.senhit.com/eurovision between Sat 7th and Sunday 8th March 2020.

The Eurovision Song Contest is the most LGBT+ friendly music TV event in the whole world, and for the eleventh participation in this song contest, San Marino has chosen to be (re)represented by an international singer: SENHIT!

The Italian-Eritrean artist has already competed for San Marino at the ESC 2011 and this year she returns to the competition after a long experience gained on the stages of the best clubs all around Europe and the United States, singing both in Italian and in English.

The success of the recent electro-pop single “Dark Room” was one of the reasons that pushed San Marino to want her strongly again in its representation. Surprises are not over yet: the high-level artistic staff is led by the eclectic creative director LUCA TOMMASSINI!

Senhit has decided to share the choice of the song to bring to Eurovision with her fans and with the large Eurovision audience not only from San Marino, inviting them to offer their advice. In fact, from tomorrow, Saturday 7th March at 9.00 am, until midnight on Sunday 8th March, it will be possible to express our preference for the song that Senhit should play at ESC 2020. The choice is between “Freaky!” and “Obsessed”, two songs full of electro pop energy and international sounds and the choice, I am sure, will be very hard.

The results? On Monday 9th March, based on the data collected, the song that the Italian-Eritrean singer will bring to the stage in Rotterdam will finally be revealed. 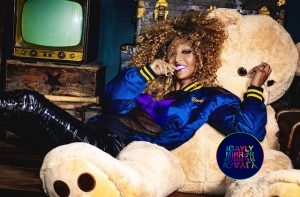 This year San Marino team defines Senhit as “the most international of the Italian artists”, (maybe they are forgetting Laura Pausini… just to say…) not only for her origins, but also (and above all) for her musical career. Born in Italy from parents of Eritrean origins, she grew up between Bologna, nearby San Marino and the world of international musicals, being often on tour with Disney on Broadway (“The Lion King”, where she had the role of the protagonist Nala, “Hair” and “Fame” to name a few) and other companies such as that of “Il Grande Campione “by Massimo Ranieri.

She later left the world of the theatre and began her solo music career.

What else can we add, if not…Good luck Senhit!